The cities in the province Siena are some of the most picturesque little towns I have ever seen. When driving through the country side, one is never more than a 15 minute drive away from one of many small villages. Each has a main street, a church, and a few restaurants. Since there were many wars between cities, each city is built at the top of a hill for good war strategy. We are staying at another Agrotourismo (essentially a B&B) that is not situated in any specific town, but is close to a couple different towns.

As we drive along the high way through the country side, I can see the rolling hills of the countryside stretching out for miles. The hills look like they are checkered with green, brown, and yellow fields. The main highway is very well kept, but the smaller roads used to get to the smaller villages can be quite bumpy, and sometimes seem to be paved with gravel.

As we visit each town, we will look for a good gelato place. The biggest tip for finding the best gelateria is to make sure it is not piled up high or is soft. When it is piled up high, it is full of preservatives to make it look better. That type is also whipped so that more air is incorporated, making it less creamy and rich. Another tip is to look at the banana flavour, and the mint. If the banana is yellow or the mint is green, then that place adds food colouring to it. Handmade banana gelato that has no chemical enhancements has a grey colour as the actual banana oxidizes, while mint will be white because the colour of the leaves do not colour the dairy.

The town of Siena (which the area around it is named after) was once a superpower to rival Rome, with palaces adorning the streets we walked along. Now-days the city is separated into 17 different districts, 10 of which are chosen to compete in yearly Siena horse race. rivalries between areas are common, so there is a large police presence at the race. We were there 3 days before the race, and already the dirt circuit was in place in the main square, spectator stands put up, and fencing surrounding the race track. Each district has its own flag that people wear as scarves, and there is a big feast for all the people in the district to attend, so it brings each district together while creating rivalry in the city.

The city itself looks very medieval, which shows that when the town was created, war was an ongoing event, happening frequently and without warning. In a painting in one of the churches we visited, one of the 12 months depicted in the picture was the month of war, shown by a man on horseback carrying a sword.

My favourite small town was Pienza. I liked it because the views from the city walls were superb, the hills rolling on and on for miles, completely untouched with mass development projects or blocks of townhouses. In the city, we found the best gelato shop we have ever been to, the man who served us was the same man that made the gelato himself! There were 8 flavours total, and all of them were exotic combinations like strawberry and rosemary or chocolate ginger. Even though the flavours didn’t sound especially good, they were perfect, the spice never overpowering the main flavour.

I love the small towns of Tuscany because they are a perfect example of a medieval town built to defend against attacks. I also like the walls that surround all of the cities, rising up perhaps 50 feet, it would have looked like a daunting task for any intruders, but happily I can stroll right in!

Sunset from the back garden.

One of the districts getting ready for the feast.

The main square of Sienna.

The view from the back garden.

The back of the Cathedral. 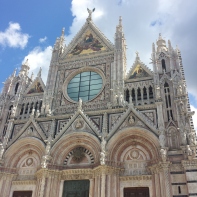 The Cathedral for Sienna.

Mommy and Daddy on the walls that surround Siena 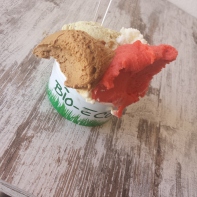 The best gelato ever!

5 thoughts on “The Small Towns of Tuscany”